Little Peotry Willow wakes up to find a tiny creature sitting on the space bar of her computer, the inquisitive Byte who wants to witness life on The Outside, meet The Power and understand True Wisdom. [Ages 7+]

The librarian carefully lifted Byte onto the top of the monitor. Byte looked down as the librarian turned the pages of the atlas, telling Byte what they were looking at. Had anyone seen her, they might have thought her rather odd, talking to herself like that, but she had always been considered a little eccentric.

She showed Byte the countries of the world, the continents, the oceans, the seas, the mountain ranges, the deserts and the big cities, the forests, the tundras, the Steppes, the islands, the wildernesses and the civilisations.

“Which country am I in?” Byte asked. “Is it the country of The Infant Playground?” 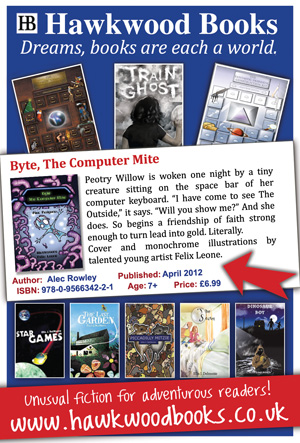 Special Offer For 2012 only, Star Games, a gentle and humourous look at Olympic competition, is offered at £1.99, the same price as the e-book edition.

At the other end of the spectrum, our adult title, Act Of Charity, is now stocked by Bertrams at trade discount prices.

Hawkwood Books is an independent publishing firm with a growing list of original fiction for a wide range of ages.
copyright©2012 Hawkwood Books
All rights reserved

E-Books for Kindle, Kobo and Google

We are now offering all our titles on various e-book platforms. To display them, we have a new DOT COM url. You can reach it by clicking the .COM icon either here or in the footer of any page. Titles should be available for Kindle, Kobo and Google E-Books. Most of them are priced around £1.99 but platforms and taxes vary. However, they are all substantially less than the printed versions, except the 2012 special price for Star Games.

Kindle is Amazon’s e-reader. Kobo is a Canadian company offering a wide range of platforms. Google E-Books also offers various formats.
Like them or loathe them, they are probably here to stay. One wonders what Caxton would make of it all…

In September 2012 we are publishing this touching, funny story by Stephen Meek, A Boy Arrives with a wonderful cover by artist Sally Townsend. Longlisted for The Times/Chicken House Best Book Award.