As promised in the last newsletter, this is a new direction for Hawkwood. Passionate and original, Act of Charity is a tale of human frailties set in the London Borough of Hackney, a hard-hitting story with a multitude of characters thrown into turmoil after a sudden, traumatic loss. Moving and disturbing, this is a powerful, memorable read.

The press conference was held at Stoke Newington. Although the Hackney Station was nearer the scene of the crime, Stoke Newington was set up for such invasions by journalists. They weren’t that regular, but unfortunately they weren’t that uncommon either. This was an unusually large gathering with national reporters and photographers and also a host of TV crews. Faraday disliked this part of his work, but it was essential not only for the news broadcasts but also for the information and leads they could initiate. 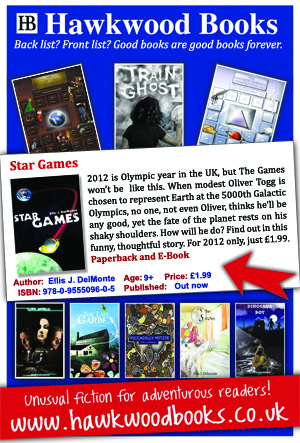 Star Games Special Offer
2012 is Olympic Year in the UK, and as the theme of Star Games is Olympian in spirit and content, we're offering it for the coming year only at £1.99, same price as the e-book version. This is a funny, lighthearted take on the Olympic Dream as well as a philosophical take on the whole idea of competition.

Hawkwood Books is an independent publishing firm with a growing list of original fiction for a wide range of ages.

We are now offering all our titles on various e-book platforms. To display them, we have a new DOT COM url. You can reach it by clicking the .COM icon either here or in the footer of any page. Titles should be available for Kindle, Kobo and Google E-Books. Most of them are priced around £1.99 but platforms and taxes vary. However, they are all substantially less than the printed versions, except the 2012 special price for Star Games.

Kindle is Amazon’s best selling e-reader.
Kobo is a Canadian company offering a wide range of platforms.
Google E-Books will also offer various formats but isn’t yet serving the UK.

Like them or loathe them, they are probably here to stay. One wonders what Caxton would make of it all…

Early 2012. Look out for a delightful new book for children by Alec Rowley, Byte, The Computer Mite with a wonderful cover and illustrations by artist extraordinaire Felix Leone