Lisi is next to own a Fantastic Construction Kit.

Following complicated instructions, she builds an ivory archway – in her bedroom! When it’s finished, she sees an oddly dressed little boy, evidently frustrated and furious at something, or someone. Should she play safe and just watch or should she make contact?

Orphaned and adopted, Lisi’s eventful young life is about to get even more interesting.

She sat at the table and opened the book he’d been reading. She was expecting fairy tales or stories, but it was a book about money. Well, this is what she thought at first, but in fact it was about making money, not like banks and all the kind of mysterious, boring stuff she heard about on television a hundred times a day, but actually how to make money, with metals and furnaces and things like that. What kind of head did this strange boy have to want to see how money was made? 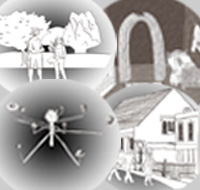 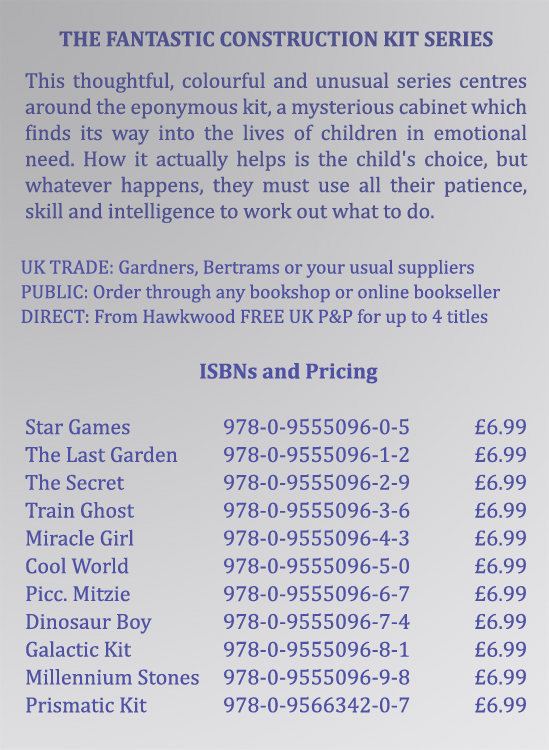 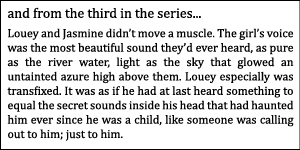 Hawkwood Books is a small but defiantly hopeful publishing venture with a growing list of original fiction for a wide range of ages.

Christmas isn’t the same without his mum, and no present anyone can buy will make him happy again, or so thinks Philip King, until he receives the strangest of gifts in the strangest of ways; then he begins to think that perhaps his mother is still there, looking after him.

For more information about the series, click on the image.

Autumn 2011, to mark the release of our first book for adults, a moving crime drama set in the London Borough of Hackney.